Growing up, we didn’t have cool companies like Lonely Planet to make interesting educational books. The academic books and encyclopedias we had access to were immensely boring. The content went on and on and the pictures were either too small, in black and white, or unappealing. They did nothing to attract and keep the reader’s attention. Educational tools have improved significantly over the past decade or so, and kids are not only learning, they are enjoying the process. Lonely Planet books fit into this category.

Lonely Planet recently launched a bunch of educational books for kids that are informative, interesting, and full of colorful pictures and graphics. They inspire kids to crack open the covers and venture into a world of wonders!

The Incredible Cabinet of Wonders 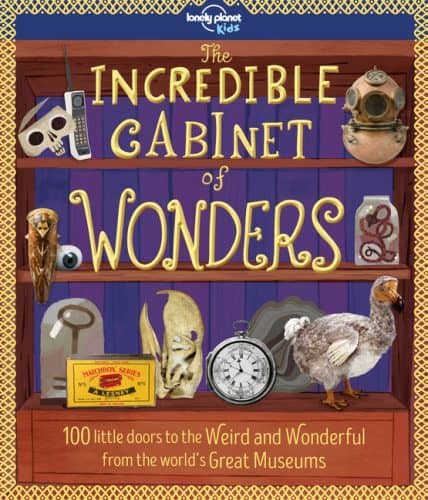 The Incredible Cabinet of Wonders allows readers to peek into a world of museum collectibles. Readers will be exposed to 12 collections or cabinets full of mysterious oddities and interesting facts. There is the Archaeologist’s, Doctor’s, Monster, Tailor’s, Naturalist’s, Treasure Hunter’s, Sailor’s, Musician’s, Scientist’s, Toy Maker’s, Miniaturist’s, and Made_Believer’s cabinets. Each has their own secrets hidden behind several peculiar shaped little flaps on each page.

Each cabinet has its own theme that lends itself to the collection. The little flaps are suspenseful, you just don’t know what lies obscured from your view. Carefully open the flaps to learn unique facts and see interesting images. The kids in my family loved the hidden message, detailed secrets, and fascinating stories behind the flaps. 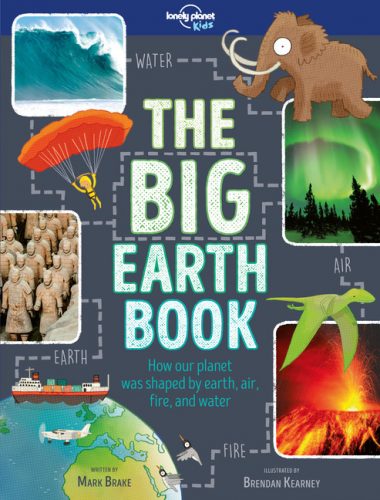 The Big Earth Book shows how 4 of the 5 elements shaped our beloved planet. They go all the way back to the beginning of time when the Earth was formed. Earth, wind, fire, and water have their own sections and feature points specifically for each element. This includes history, science, geography, people, and more.

Each page is filled with colorful images that naturally capture your attention. The information covered is enormous. From plate tectonics to earthquakes to the stone age to the sweeping grasslands of Europe to the Northern Lights to outer space to music to desert winds to the greats fire of London to oil slicks on our oceans to bridges to tides, the kids will have access to a plethora of information in just this one source.

Example: Ingredients for fire – Fire and humans – The history of fire – The dangers of wildfire – The Great Fire of London – Gunpowder and fireworks – The combustion engine – Carbon and global warming. 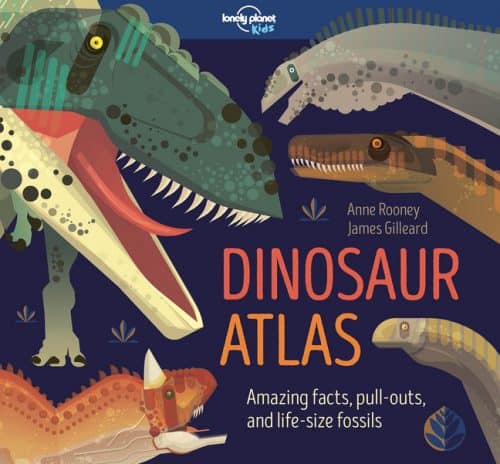 The Dinosaur Atlas will take you back 200 million years ago when in prehistoric times, dinosaurs roamed the Earth freely. It’s filled with amazing facts, unique finds and lots of pullouts that expose even more information. The map at the beginning of the books shows which dinosaurs existed on various continents. In North America, we have found the fossils of several dinosaurs including the Tyrannosaurus Rex, Parasaurolophus, Stegosaurus, and Triceratops to name a few.

Ever hear of the Massospondylus – they’re from the early Jurrasic period and existed in South Africa. Of course, there are creatures that swam the oceans and soared the skies, and you’ll learn more information about them. The remains of a dolphin-like Opthalmosaurus have been found in several places around the world.

There are pullouts for each specific continent that fill in more details. The Dinosaur Park in Drumheller, Alberta is recognized as the Dinosaur capital of the world. The Badlands is an area where numerous fossils have been found. In fact, more than 150 full dinosaur skeletons have been unearthed in this park. They also cover the delicate work of fossil hunting, where paleontologists carefully scrape and brush away soil to find the remains of a once majestic creature.

There are a lot of informative facts about the dinosaurs, like the size of their brain. They actually had very small brains compared to the enormous size of their bodies. They’ve also shared where paleontologists got it wrong in the past and show the correction. Did you know that the Sciuruminus had fuzzy feathers? The kids thought this was fascinating.

We found the information so interesting. It was exciting to see what the dinosaurs really looked like, what color they were, what they ate, and how they hunted. Most of them we never heard of, so it was educational and eye-opening. The Dinosaur Atlas covers so much enthralling information, it was hard to put the book down.

All of these Lonely Planet books would be beneficial in a family library. They’re formatted to be interesting yet educational. Kids don’t mind leaving their electronic devices to pick up these books and pursue the pages. It may be curiosity that got them to open the books, but they’re still learning in the process.

Disclaimer: I received product to facilitate a review. All opinions express are my own, yours may differ. 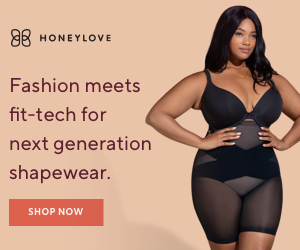